I made it back from the frozen tundra of Minnesota!! Yay! Here is the thing: I am officially not going to complain about cold weather ever again. What I experienced this weekend is cold weather. The 20 Degree weather we have to put up with here and there is nothing… that is shorts and t-shirt weather for the peeps up north.

I hit up something called the Beer Dabbler Festival. Bunch of people out in the snow, drinking beer, listening to music, and having a good time… I know, how do you have a good time when you are nearing hypothermia? Well, they do. But, as it turns out, this was the coldest festival in its 5 year history. But I was still there in full effect. Why? Because I officially attempted to break my first world record. It was all official and everything. They had paper work, they had people making sure it was legit, but the only thing that was really missing was… that one thing you need to really make it happen… what is called again? Oh yeah: people. That’s what we were missing.

The attempt took place around 7:30 pm, after people had spent over 6 hours in that weather… it was so cold, their beer would start freezing within seconds. So naturally, people started leaving early. We needed around 6,000 to officially break the record, which was held by some good people in Seattle at around 5,800. We got close to it. We had about 400 people… I think, maybe a little more. So my first attempt at an official world record did not go as planned, thanks to Mother Nature. Dang it. 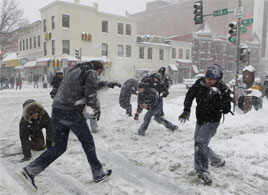 But we still had a snowball fight. Snowball fights are fun… until you get hit right in the face by an ice ball. There are soft snowballs, which is what we should all be throwing. Its fun, snow flying everywhere, people running around. It feels like you are playing a video game in person… and then the ice balls come into play, those feel like a rock hit you. That is what one gentleman decided to hit me with, point blank, while I was talking to our Dish Nation camera. I think we got it on camera, and I think I saw the guy running by after it happened, but I was a little dazed. I do remember laughing after it happened because I didn’t want to look like a wuss. I did the whole “walk to the exit, while smiling and waving goodbye”. Who was I waving goodbye to? I don’t know. But I got out there. It felt like my nose was gushing out tons of blood… turned out to be nose water, and not blood. I ended up with a huge right side of the face, and what I think is a sprained nose. Can you sprain your nose? It hurts to move, or touch, so I think its sprained.

In other news: Cason got the pink eye, which he may have gotten from other kids, or because he is exploring his diaper sometimes, and touching his eyes. We are still investigating.