My poor daughter. Emma Kelly spent almost an hour setting up what she called “The a little bit of evrything Store.” She wanted to keep it a secret from me, so I sat in the next room answering emails and texting while I heard her clanging around on the other side of the wall. It turns out she was emptying my pantry, my silverware drawer, her book shelf and her toy box, putting all of the merchandise on display in the living room so she could sell it to me. When I saw what she’d done, I had to stop myself from complaining about having to put all this stuff back up again and remind myself that she joyfully set this up just so she could play with her mommy. So I smiled and shopped while she guided me through all the merchandise so I could make well-informed purchases. I gotta tell you — she’s a great salesperson! But after about 10 minutes of shopping, it was time to tear it all down, put everything back (except for what I realized was expired….I’ve gotta do better having us eat stuff before it goes bad. I threw away something from 2011!) and force her to take a bath. And I don’t use the word “force” lightly. But before I started with the threats of what will (never) happen if she doesn’t get herself butt naked and into that tub, I gave her a big hug and told her how much fun I had shopping at her store and how smart and creative she was and how much I appreciated all the trouble she went to setting it all up for me. And then I told her I was sorry that she didn’t have anybody BUT me to play with, and that’s when she hugged me really tight and asked me, “Why didn’t you have another baby when I was younger so I could play with somebody all the time?” Talk about a punch in the gut. 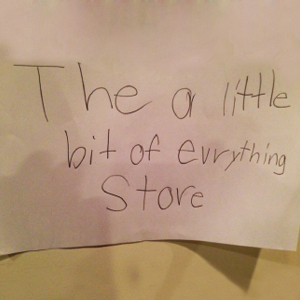 I told her I was sorry and that I wished I could’ve given her a brother or a sister but it didn’t work out that way. And she said, “That’s okay!” and planted a big kiss on my mouth. By the way, at what age does that stop? I’m not ready for that to stop, but I know it will.

But now she’s FINALLY in the bath and I’m just sad. I really wish I could’ve given her a brother or sister. I had always pictured my life with a couple of kids and never imagined it ending up any other way. But life didn’t work out the way I planned it, which isn’t a bad thing. It is what it is. But now I’m trying to figure out how I’m going to fix this for my kid! The options are pretty limited:  I could adopt; I could marry a man who has custody of his own kid; or I could move to a neighborhood with tons of kids for her to play with and that would distract her from being an only child.

But being a single mom of a 7-year-old is hard enough. How could I handle being a single mom of TWO?? I just don’t think I could swing it the way my life is right now. And if it was that easy to marry a man with a ready-made kid, I would have done that a LONG time ago. And as far as option three, I seriously think that if I put my house on the market, my neighbors across the street would sue me for custody of Emma Kelly.

So this is just what it’s going to have to be for now — me and my kid and a garbage can full of expired merchandise I just bought at “The a little bit of evrything Store.”