I think the older you get, the fewer times you get really excited about stuff. Maybe, it’s because as you get older, you have already experienced so much that it just takes more and more to get you really excited. And that’s kind of a shame. The “exciting” feeling is such an awesome feeling. Man, that anticipation/excitement feeling before you go on a super cool vacation. What about that excitement before you see an old friend that you haven’t seen in years??? 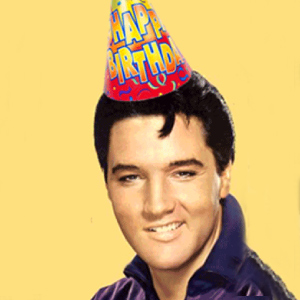 So, that’s kind of the feeling that I have right now with Jerry Springer coming to perform Elvis songs at my bar tonight in celebration of Elvis’s Birthday!  And I LOVE this feeling. It’s that feeling of something really big is happening but at the same time, I have no idea what is really going to happen. Really, I LOVE this feeling. I’m way more excited than I was when the Naked Cowboy came to town. No offense to the naked cowboy. You know its big when FOX News calls and wants to do a segment on the event. Yep, they’ll be there. It could be really, really good. What could go wrong? I don’t even want to think about this. I remember the time I performed a “Lil John Deere” and I never had the chance to memorize the lyrics and never had the chance to rehearse with the band. It was a disaster. The Blues Band is experienced. Ok, sure, they have never performed Elvis songs before and they had no idea who Jerry Springer was. That’s beside the point. The leader of the band told me that if I gave him the title of the songs, they would learn them. And so I did…Monday. Ok, my feeling of excitement just turned into a huge Knot in my stomach!

But, despite what happened to me back then, Surely, that won’t happen with Mr. Springer…Of course not. He has his own plane. Of course he’ll be good. If you’re not good, they won’t give you a plane. It’s in the rules, isn’t it? Well, ready or not, here it comes. An idea that I had just sitting around the bar has come to fruition. And its all happening tonight. Jerry Springer sings Elvis tonight!

Filed Under: Big Al, Kidd Kraddick Best of the Day
Categories: Kidd Kraddick
Comments
Leave A Comment
Back To Top
It's National Use Your Gift Card Day - So Go Shopping